Opinion: What is the role of the State Party?

It appears I'm doing a series on the State Party, specifically the Colorado Republican Party.  That wasn't quite my intent when I started with my post about a week and a half ago, but another needed to be written... and now this one is here.

For those who don't know, on 2 March (this Saturday), the Colorado Republican State Central Committee has a choice between the Status Quo and a much-needed change (not that I have any opinion on the matter whatsoever).  My hope, in this post and the two proceeding it, is to lay the groundwork for why change is needed.

I don't get a vote, but it is the duty of all Republican Party members to let those who do have a vote know where we stand--and that doesn't mean you have to agree with me.  This is our Party, after all.  We should let those who represent us know how we feel, much like we do when we send letters to legislators on bills or testify before committees.  This election affects all Republicans in Colorado, not just those who can vote on it.

But maybe I got ahead of myself with the last two posts.  So let me back up a little bit with this one.

To those, I would add another question: "What is the measure of success for a State Party or State Party Chairman?"

To the previous questions, I've heard many answers, from the old and tired "fundraising" to "beat the Democrats at their own game" to "infrastructure" and "networking"... but all of them fall short.  All of them, to be sure, are part of the answer, but the answer is much, much more simple than any of those.  You want to know what it is?

That's it.  No more.  Nothing else.  Fundraising, technology, strategy, infrastructure, networking, ground game, recruiting, training and supporting candidates and staff, etc. are all a part of that, but they aren't enough alone.  They must work together, or we get the failures we've seen since 2004 in this state.  And it still amazes me that a Party supposedly all about individual freedoms and personal responsibility seems to think that a top-down, Denver-centric, one-size-fits-all approach actually works in every state, in every county, in every precinct, and in every race.

As to the second question, the measure of success, the answer is also pretty basic...


The measure of success is if elections were won.

I know, call me crazy.  That's too easy, isn't it?  There's nothing in there about fundraising!  Unfortunately, in Colorado, the Republican Party seems to be in the business of losing elections pretty consistently since 2004.  I don't know about you but I'm getting kind of tired of losing.

From my perspective, some of it has to do with where we chose to spend money in 2012 as well.  We can raise all the money in the world, but if it isn't put to effective use, it's nothing more than a tool buying our continued losses. 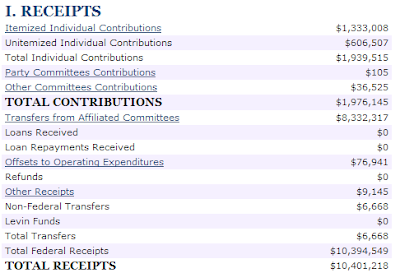 While I understand that Federal races tend to cost more money, are higher profile, and that they are indeed important, the State Party's first responsibility is to the State of Colorado.  We cannot keep sacrificing our state just to lose federal elections.  Colorado can't survive total Democrat rule any more than the country can, but we've allowed that to happen in this state because we focus our time and attention on national races.  Some of this is an education problem--let's face it, the undervote for down-ticket races is huge.  That doesn't make them any less important, as we are learning the hard way with the far-left agenda being jammed down Colorado's throat in the State Legislature right now.

I was recently reminded that we saw the highest delegate badge fees (at least in my recollection) this year, and candidates for President had to pay for the privilege of being on our non-binding straw poll ballot.  I wonder what the hard working and dedicated Republican activists who paid those increased fees think of having hundreds of thousands of dollars left unspent in perhaps the most critical election in the last century, if not our nation's history?  This one is none too happy.

For those who know me, you probably remember the hubbub I caused in El Paso County as the GOP Secretary for daring to disagree with a policy put forth by a State Legislator.  The horror!  You would think if someone did something that relatively minor (I dare you to find me any Republican I agree with 100%--even my husband and I aren't lock-step on policy issues), a Republican County Party Officer donating to a Democrat during his tenure would have gotten at least the same response--scorched earth, character assassination campaign, a gag order, censured... and at the very least, threatened with removal for actually violating the By-Laws in their letter (not just the spirit as folks argued against me), right?

Turns out, not so much.  In 2007, while the Vice Chair of the Denver County Republican Party, Chairman Ryan Call maxed out a contribution to Bernie Buescher, a Democrat candidate for State Representative out near Grand Junction.

My understanding, from talking to many active members of the Denver GOP at the time, is that no sanctioning action was taken, and Chairman Call certainly wasn't removed from office for his violation.  And, in the interest of fairness, Chairman Call then maxed out to the Republican in the race, Laura Bradford--so that makes everything okay, right?  Here's my question... why did he not ask for the contribution to Buescher back, at the very least?

We could move on and forgive an indiscretion, certainly.  It becomes much harder to do so when that rule is then unfairly applied.  This Party, I thought, believes in the rule of law--rules are rules and apply to everyone.  So, in 2010, why were Tancredo supporters not removed from their Party offices (even down to precinct leader)?  Why did Chairman Call take the position he did regarding my censure (on something that did not clearly violate the By-Laws, unlike an out-right contribution to a Democrat), saying one thing in public and another in private?  Why did Chairman Call participate in the removal of three precinct leaders from voting earlier this month at the Eagle County Republican Organizational Meeting... for doing the exact same thing he did, publicly support a non-Republican candidate?

I'm all about everyone getting to vote their conscience, and to support whom they choose--in fact, I encourage it.  I don't believe Party always trumps person (most of the time... almost all of the time, even... but not every time).  But there is a standard for Party officers--and we should hold all to it, or none to it.  It can't be arbitrarily applied.  That, at the very least, creates the appearance of a ruling class and a "rules for thee but not for me" mentality that is dangerous and not very Republican.

And speaking of Denver County... it is my understanding that Chairman Call, when he left the Denver GOP and subsequently became State Party Chairman, left a parting present of nearly $10,000 in debt.  It seems to me ironic that Chairman Call, who frequently makes a point of discussing the debt that the State GOP was in when he took over (and to the credit of those raising funds, was taken care of), left a similar problem for his successor.  Again, this could be overlooked, but from what others have told me, this is a pattern dating back to his days in the College Republicans.  Being hearsay, I won't go into the details shared with me until I can get some physical documentation.  Regardless of whether this is a one-time incident, or a series of unfortunate events, there is great irony considering how Chairman Call begins most speeches I've heard from him recently--that he dug the State GOP out of the same problem with which he left the Denver GOP.

Not that anyone is asking my opinion, but let me offer it anyways: my advise to win elections?  Let's start with don't donate to the "enemy", spend your resources wisely, and don't leave entities in debt.
Posted by Sarah M. Arnold at 12:48 PM