I try very hard to keep theology and politics separate on my blogs for a number of reason, and this post is a good example of why I try to do so--because it. gets. messy.

This post was inspired by a Facebook discussion that, frankly, is better suited for monologues than short bursts of information in between other comments, which is why I've now taken to two blogs to discuss it.

If you'd like the whole back story on how this meme came to be, read the post over on my theology blog.  I'd like to give a little back story here on the political reasons I had for my post.  It was meant all along as a political post, but when you mix politics and religion, confusion seems to be the inevitable result. 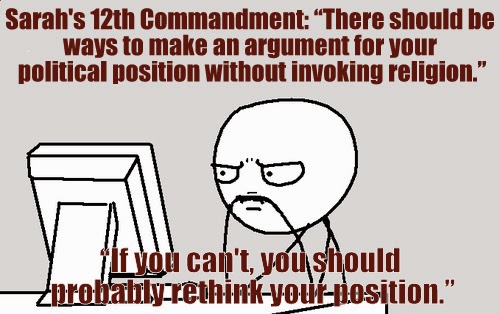 The point of this meme, and the post inspiring it, was not to say that one can't have religious views or have them inform one's political views, but rather, that it is better from a policy and public square standpoint to make your case based on reason, logic, natural law, knowledge, etc. than it is to make it from a "Bible tells me so!" perspective.  Such arguments persuade no one.

Additionally, I use Christian examples since that is what I am and see most often, but this applies equally to all religions, including secular ones like humanism, Marxism, progressivism, atheism, etc.  "Because Marx tells me so!" is equally unpersuasive.

At any rate, this whole thing got started with posts I've seen on the Israel/Gaza/Palestine conflict.  Being a non-interventionist (not anti-military or defense by any means, just against entangling ourselves in conflicts unnecessary to our immediate protection) by nature, I have issues with us talking about being involved there anyways, but that's a policy discussion for another time.  Here are some observations on the discussion I've seen on Facebook of late:

This is far from the only issue where theology comes into play.  All social issues have that undertone, as well as a slew of other issues.  It's certainly not any better making strictly religious arguments about other issues, I'm just using the Gaza conflict as a good example since it's been in the forefront lately.

Morality and theology are not the same thing.  I know both moral atheists and amoral Christians.  Let's use our God-given brains to make logical, articulate, moral arguments that can persuade instead of arguments that have zero persuasive value to those not of our religion.  Heck, I'm a Christian, and I find many arguments by those of other denominations about policy to be not persuasive (the Gaza conflict is a perfect case in point).

If the intent as Christians is to make an impact on the world, we do a poor job of that if we can't persuade anyone.  The government was never meant to be a hammer to force belief, but to be a curb on sin and arbiter of justice when necessary.  It cannot have the Gospel (Jesus) because it is all Law.  Any move towards theocracy is worse for us than it is for anyone else (and it's pretty bad for others, you can look to Islamic countries in the Middle East for examples of why it is bad).

Let me end with a simple plea.  Please, for the love of all that is holy, stop abusing my religion to advocate bad policy!  In fact, stop abusing all religions in general to discuss any policy, good or bad, period!
Posted by Sarah M. Arnold at 2:15 PM